Kicking off the new season with one of the most extraordinary voices in new music.

Liza Lim is a researcher, educator and composer. In her work, she focuses on intercultural collaboration. She explores themes such as beauty, the relationship between humans and nature, incorporating all of human history, and the transformative power of ritual. Born in Perth, Australia, to Chinese emigrants, she brings together influences of Chinese, Japanese, Korean culture and the sounds of Australia’s indigenous peoples with the aesthetics of contemporary Western music.

We give Liza’s music a stage in this portrait concert with two works that are particularly close to our hearts – an early piece and a more recent composition.

Work commissioned by ELISION and Handspan Theatre & with financial assistance from the Performing Arts Board oft he Australia Council.

The work is dedicated to Daryl Buckley

I began writing Garden of Earthly Desire with the idea of narrating simultaneously many different (musical) stories on many levels. My primary inspiration came from Italo Calvino’s Castle of Crossed Destinies in which sequences of fables arise from the interpretation of arrangement of tarot cards. The stories thrown up by this process intersect and illuminate each other with a multiformity of meanings that Calvino ‘reads’ from the cards, embedded as they are with memories, centuries-old of Western culture.

This kaleidoscopic patterning of meanings finds accord with my recent aesthetic preoccupations with fragmented, exploded structures that I term ‘debris’ forms. Central to this area of exploration lies a belief in a hypothetical ‘wholeness’ of an idea – the idea that is the underlying principle of the music – that presents itself, coalesced into a momentary flash of consciousness, in the precompositional stage. In the process of trying to realize this idea however, it becomes splintered and fragmented in a field of technical considerations – strategies, games, filters – that is, different readings of possible meanings of the idea. The piece of music therefore is not so much a completed “art-object” as the resultant ‘bloody traceries’ of layers of interpretation.

The work offers no ‘neat’ final solution but rather, seeks to present a complex flux of expression in time – a celebration of the multiplicity and richness of the life in and around us. Hence the appeal of the tarot – the characters of these archetypal figures find musical analogies in the work. There is the Juggler – the alchemical, mercurial figure engaging in a dialectic of extremes; The High Priestess – totem of initiation and the gathering of energizing forces; the Empress – fecund, pagan, teeming with life…

The work’s connection with the fifteenth century Flemish painter, Hieronymous Bosch and his tryptich Garden of Earthly Delights was arrived at when I had already completed a substantial part of the work. I saw remarkable correspondences between various aspects of the Bosch – its tripartite structure; the surrealistic richness of the moods explored in the panels; the detailed fantasy figures – and the charaoters of the different strands of my music that I had organised into a 3 x 3 x 3 cycle of sections.

Every aesthetic trace, every footprint of an object, sparkles with absence. Sensual things are elegies to the disappearance of objects.
– Timothy Morton, Realist Magic

Vast conglomerations of plastic trash circulate in five gyres in the world’s ocean currents and are ground into toxic fragments that sediment on remote islands and within the fish we eat. Our every-day rubbish shelters hermit crabs even as acid waters dissolve their former shell habitations. Albatrosses scoop up meals of plastic packaging to feed their chicks that then choke and starve as they ingest this colourful non-food.

Like this plastic waste, all time and its traces are with us still, albeit in residual and pulverised states. I have made a music out of heterogeneous relics of the past – a coarse sampling of ‘extinction events’ ranging from the spectral echoes of a creaking 19th century in piano music ‘on an overgrown path’ (Janáček), to a faulty transcription of a recording of the last mating call ever heard of the now extinct Kauai O’o bird, to tracings of a star map that captured the Chinese southern night sky in the 9th century. These time-traces rub against each other in ever-degraded cycles. Fleeting repetitions are pulsations of disappearance and point to the uncertainties of human memory and its collapse in abject forgetting.

There is broken grandeur and there are attempts to sing.

There is the uncanny dawn chorus of the fish-life that populates an endangered Australian coral reef.

Time breathes out an improbable hope.

How with this rage shall beauty hold a plea?
– Shakespeare, Sonnet No. 65 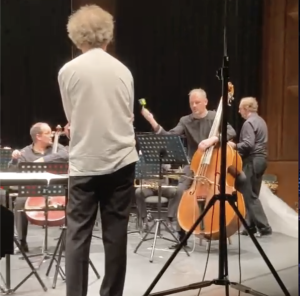 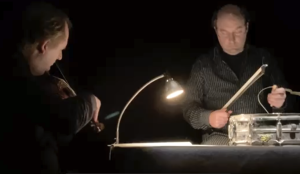 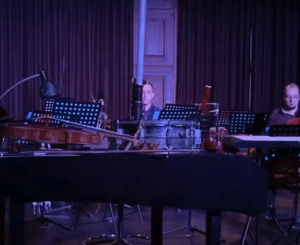